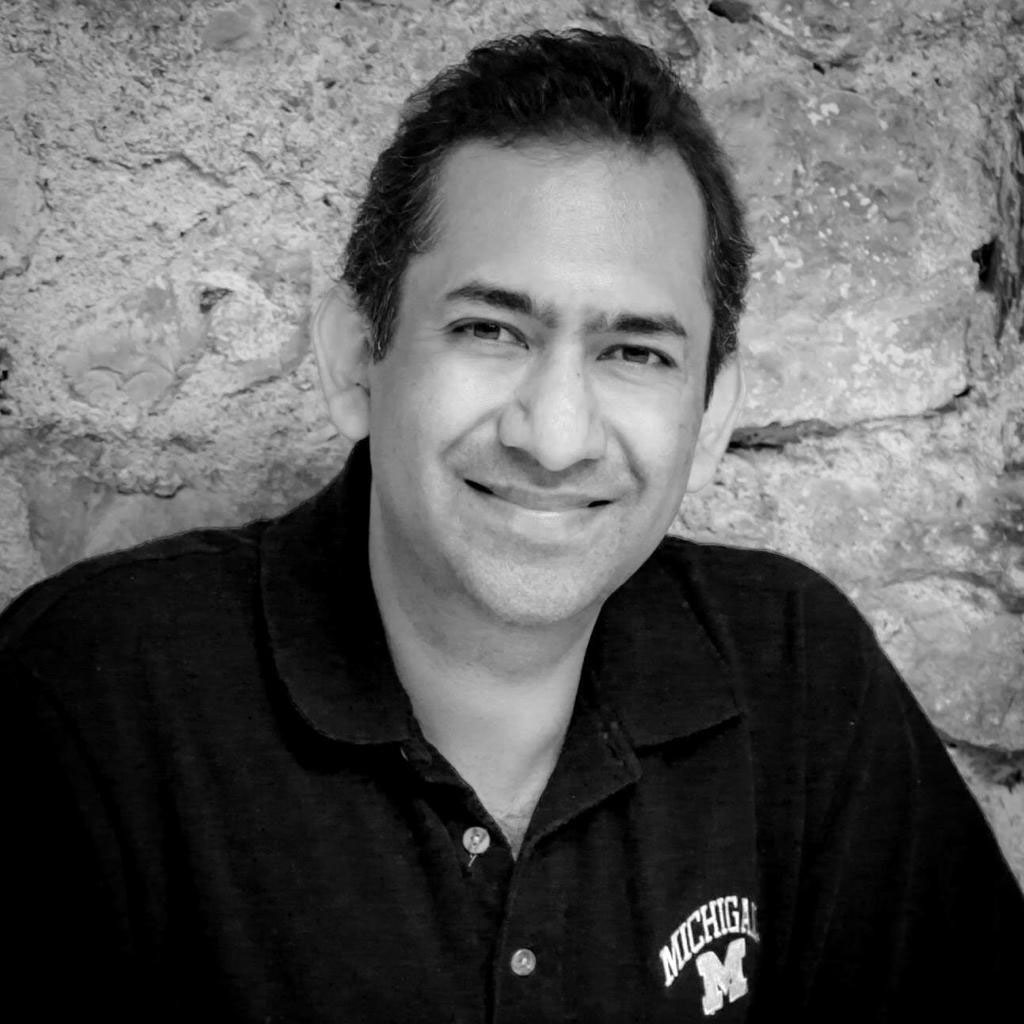 Ritesh Bawri, is a global influencer on health and wellness. He has a certificate in Physiology from Harvard Medical School, Nutrition from Stanford Medical School and Tufts University.

He has a weekly video and daily blog with ~ 8 million views per annum from 155 countries. Five years ago, he successfully reversed his own Type II Diabetes, Hypertension, Bronchial Asthma, Hyperacidity and Sleep disorders.

Since then, he has helped thousands of people from all walks of life do the same. Entrepreneurs, CEO’s, Politicians, Bureaucrats and Celebrities have benefitted from his intervention from over thirty countries in the past five years.

Ritesh has spoken at the Prime Ministers Office, NITI Aayog, Invest India among others. He has also spoken at EO and YPO Chapters and at organisations such as CII and FICCI.

He is a fourth generation entrepreneur with a family history in manufacturing. An MBA from the University of Michigan, Ann Arbor, he runs a Big Data firm Quantta Analytics.

Ritesh is a globally recognised health and wellness influencer. He has helped thousands of people restore their health from all walks of life. He speaks and writes extensively on health.

Neha further explored photography at the School of Visual Arts, New York. Her work-in-progress, entitled “Conversations with the Sea,” has been featured in the American Photographic Artists gallery.

In 2016, Neha founded Kopai–Paar, a startup which collaborates with the handicraft community in India to create unique handcrafted pieces, with the belief that helping and supporting crafts, artisans and artists must be a conscious decision.

Neha has recently started organic vegetable farming, growing seasonal and chemical free food in the outskirts of Kolkata. She also makes small batches of seasonal products from her farm produce like haldi powder, kimchi, mustard oil etc. and is planning on expanding the range soon.

Money may not exactly buy happiness but it definitely can alleviate stress, worry, and insecurities and allow us to enjoy the present.

Four steps to being “Financial Literate” leading to “Financial Independence”

Step 4 – Set up an Emergency Fund

Understand being Rich vs Wealthy. Invest across Asset Classes like Wealth protectors- FD, GOLD, Real estate. Trust and Wills should also be planned. It will ensure lifestyle for dependents. Wealth Planning is s Family strategy hence all stakeholders should be involved. 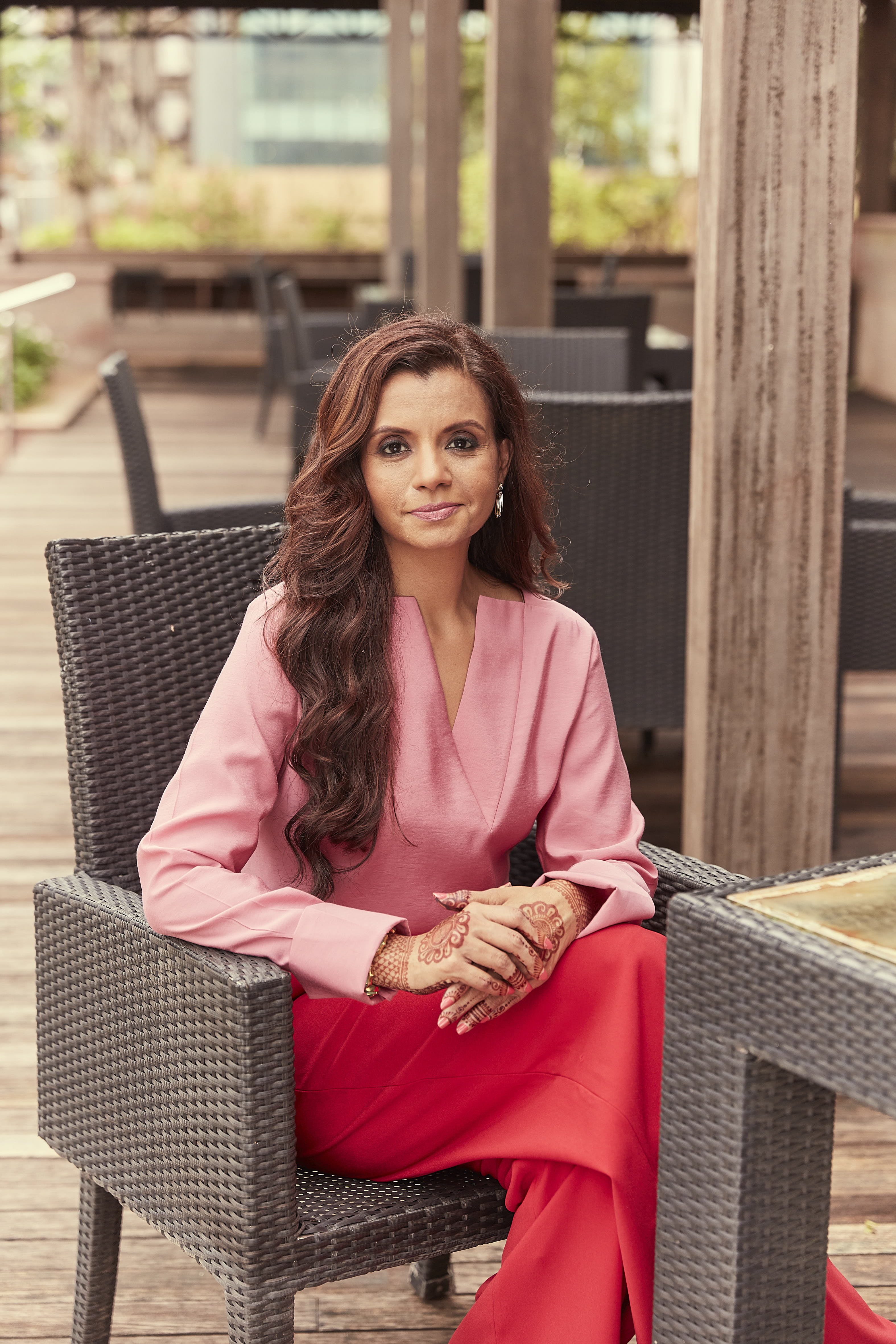 Priti Rathi Gupta is the Founder & Producer at Ishka Films and Managing Director & Promoter at Anand Rathi Shares and Stock Broker Ltd., but at the base of all her ‘day jobs’ is the aspiration to bring empowerment and equal opportunity to women. Married at 19, she relegated all her dreams and aspirations to be pursued at a later stage, but soon went back to college, got back to working full time, and has made headway in the financial services industry – an industry dominated primarily by men – to become one of the most influential and celebrated women in her field.

It has been 18 years since she started working full time, and Priti has never looked back. Having won several accolades in the financial services sector, she wanted to pursue her passion: filmmaking. Being exposed to the intricacies of the movie world while setting up a film fund for a friend, she moved slowly from the financial world to the world of films. While finance has been part of her DNA, given her family business at Anand Rathi, she was deeply attracted to the art of storytelling through films. She discovered a discernable gap in Indian cinema when it came to fun, quirky and content-driven cinema. She soon set up Ishka Films with the intent of capitalising her bent of mind for the arts and her business acumen, to meaningful and credible cinema.

Her first film, Waiting, had its world premiere at the Dubai International Film Festival in 2015 and received positive reviews from critics. The movie starred Naseerduddin Shah and Kalki Koechlin, and since this was her first film as a producer, she got her hands dirty by getting involved in everything, right from working on the script, to talking to actors, to shooting, budgeting and line production. In August 2018, her movie Karwaan, a Hindi comedy-drama starring Dulquer Salman, Irrfan Khan and Mithila Palkar, was released. It received positive reviews from audiences and critics alike. Her third film is being pitched to Hollywood producers. It’s a biopic of a well-known astronaut in collaboration with an acclaimed film maker Meera Nair and Guneet Monga who has won Oscar for her short film. Priti is currently working on several upcoming projects, three short films and one biopic with the likes of Adah Sharma, Hiten Tejwani and Prashantt Gupta, to name a few. With an experience of almost three decades in investments and trading and create a niche for herself in a male dominated space, Priti continues to rally for greater female participation in the films’ space, especially when it comes to roles of direction and production in films.

Priti had long been mulling over the thought of financial empowerment for women and it was during a presentation for a class on strategy at Harvard Business School that an inkling of an idea was transformed into a business idea. Having worked in the financial services sector for almost three decades, Priti understood that financial services companies considered men to be their primary audience and was keen to turn the industry on its heel to make it more accessible for women. She envisioned a product where she would take her expertise in financial services and create something to help women achieve their dreams and overcome their financial fears, giving rise to LXME (read as Lakshmi).

Priti is married to Pradeep Gupta, Co-Founder and Vice Chairman at Anand Rathi Group and has two children. She is a fitness enthusiast who enjoys yoga and running. Her interests extend to music as well; she is a trained Classical Singer with a diploma in Hindustani Vocals. She also keenly follows the Indian art scenario very closely and makes it a point to visit art galleries and exhibitions in all her countries of visit. Being an avid reader, her library flaunts widely read authors like Haruki Murakami, Laszlo Bock, Milan Kundera and Devdutt Patnaik. An alumnus of Harvard Business School, Priti Rathi Gupta has also completed a Post Graduate Programme in Family Managed Business from S.P. Jain Institute of Management and Research, and has completed her B.Com from H.R. College of Commerce and Economics, Mumbai. 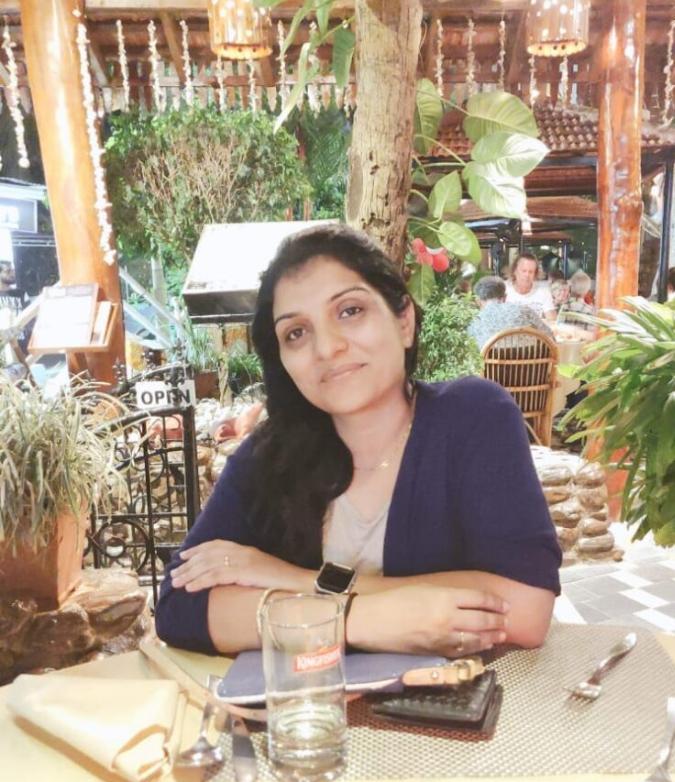 Divya works with the Corporate Quality group of TCS, specialising in Data Privacy and Risk Management in IT. An Electronics engineer by qualification, over the last few years, she has also been trying to learn the investment principles via fundamental and technical analysis.

She lives in Mumbai with her husband and two kids. If not in Mumbai, she can be found in Cavelossim(South Goa) or Jodhpur, her hometown.

She loves long brisk walks and strength trains 2 times a week. During the pandemic, she resumed her Kathak training after years and enjoys the dance sessions with her daughter.

1/2 of a large green cabbage, shredded

Put the cabbage in a large bowl and mix with lemon juice to remove the rawness of the cabbage. Keep aside for 5 mins.

In a small bowl, mis the olive oil with the garlic paste. Next add the herbs and mix well.

Add the herb salsa to the cabbage along with the spring onions and salt to taste. Toss well.

Add zatar and mix again. Set the Salas aside for a few minutes so the flavours emulsify. Serve at room temperature. 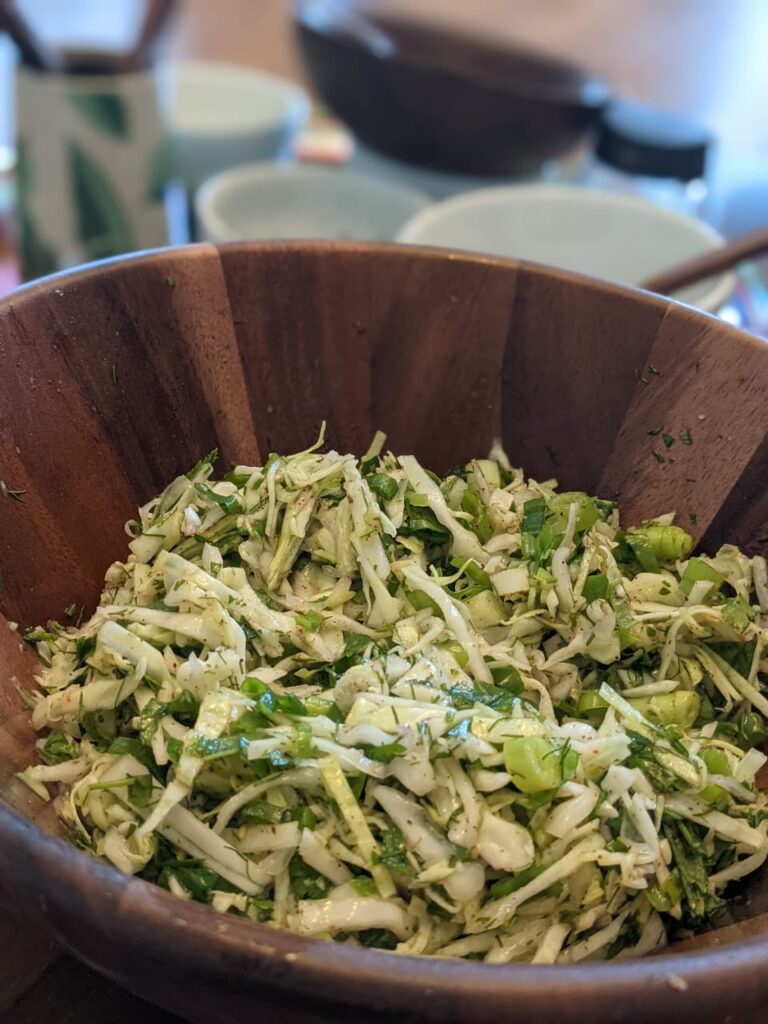 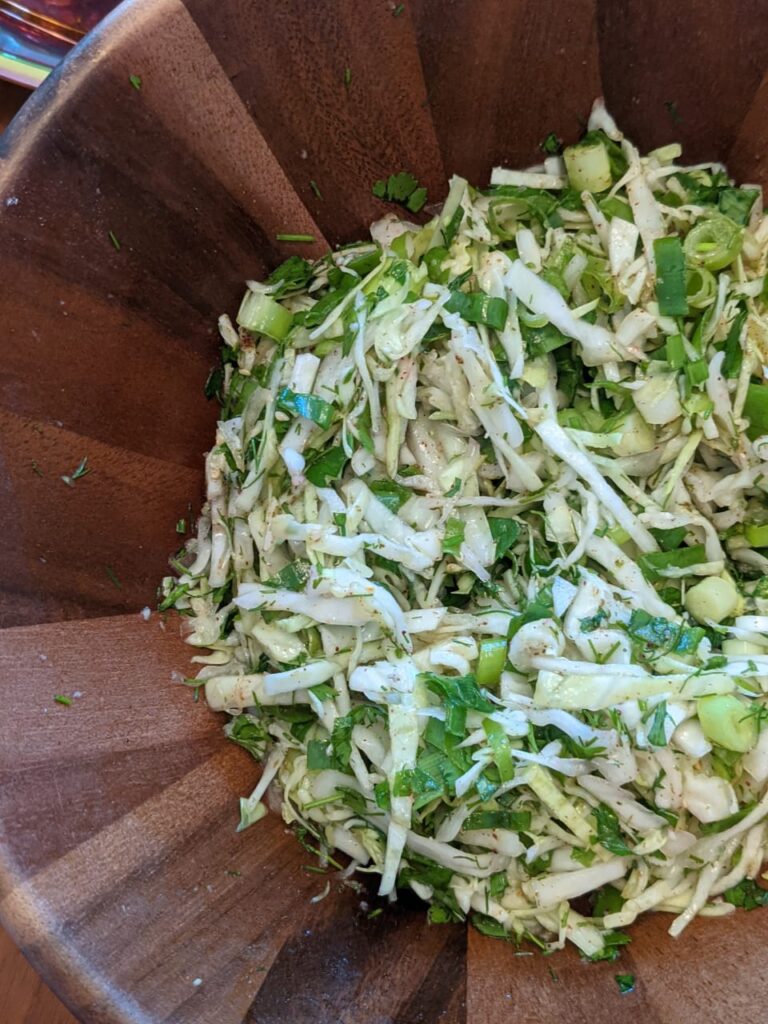 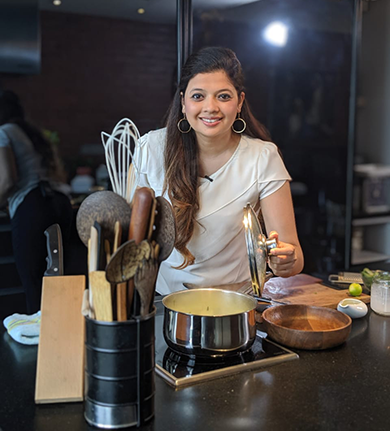 Manjri Agarwal, mother of two is always looking for adventure, be it in the kitchen or in the mountain, a health coach and a fitness enthusiast whose soul is a traveller!!!

Manjri Agarwal, the founder of Bigplatesmallplate is a certified health coach from IIN, food writer with 2 published books, columnist at The Telegraph and now obsessed with the deep rooted knowledge of Ayurveda.

When she isn’t cooking or writing, this adventurer can be found in the mountains, trekking and climbing towards her inner Everest.

She has been passed on her passion for cooking to her two boys (13 and 11 years) and both cook regularly and independently. She believes that cooking is a life skill and why should only girls have all the fun in the kitchen. 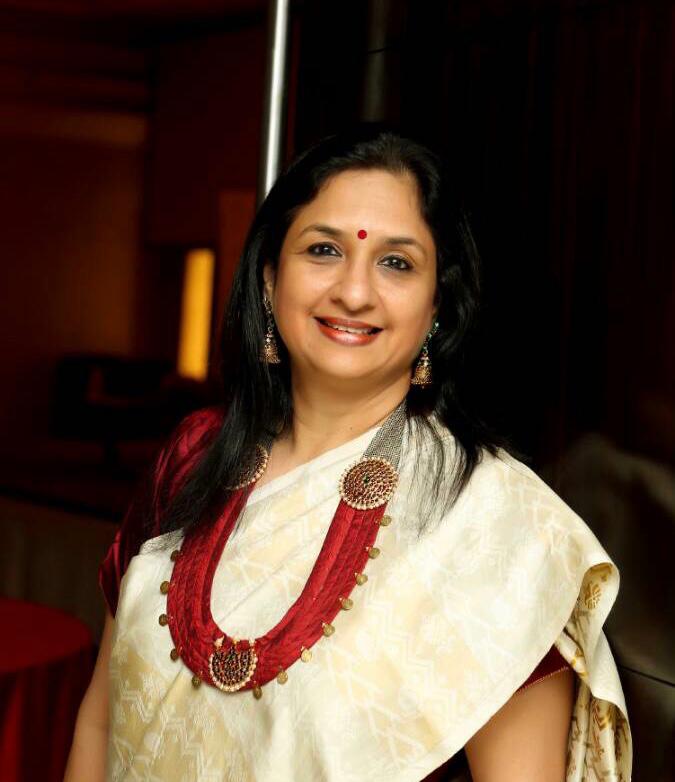 A fitness, sports and yoga enthusiast, an entrepreneur, mother of two (soon to be mother-in-law), Sujata Mundhra firmly believes in leading a healthy and balanced life and inspiring others to do the same.

Based in Chennai, she is an avid cyclist and swimming champion, who follows a very disciplined exercise and Sattvik diet regime, based on principles of naturopathy and Ayurveda. A state level tennis player in her youth, she grew up playing many sports and was an athlete champion throughout her school and college years.

Sujata is founder member of Chennai’s The Duchess Club, a 300+member women’s club, with the core purpose of learning, evolving and sharing.

Her unending quest for new skills and activities inspired her to learn Sanskrit and Gita during pandemic times and she is also imparting Hindi classes online.

Notes for session with Shajan 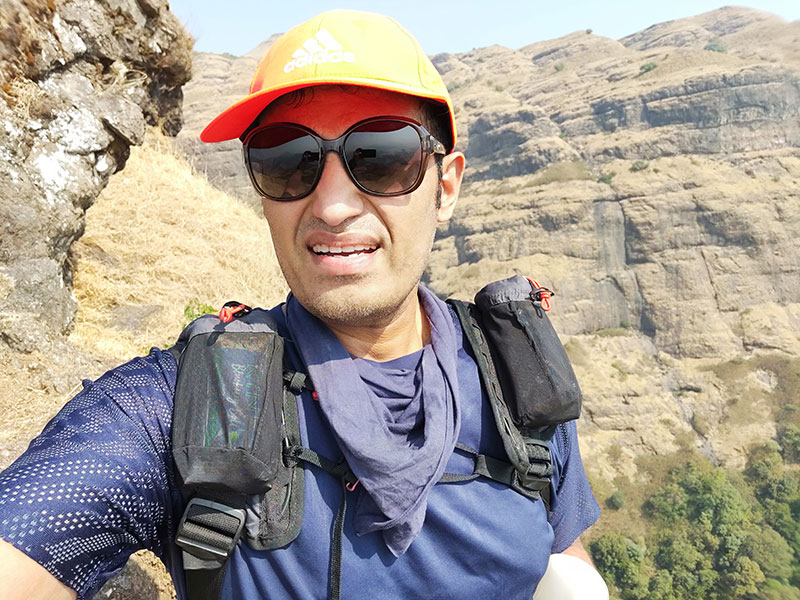 He has featured in India Book of records for Indoor Running & he is a Limca Book of Record holder for maximum Squats.

Currently working as Vice President at Aptech Ltd. Shajan is a graduate from St. Xavier’s College, Kolkata & has completed his Advanced Management Program from IIM, Kolkata. He has more than 23 years’ work experience with leading brands.

Conferred with the Rex Karamveer Award for Social Impact in 2019, Shajan Samuel is a social evangelist & through his production house, makes films on social causes. His last short film, ABC, won 31 awards and was screened in 50 film festivals and was covered extensively in media. The marketing of ABC was a case study in leading Business Schools.

He was the first person to train Bangalore traffic police in a free stress management workshop for 18 months from 2012-2014 & then made a documentary film on them, “The Resilient Bangalore Traffic Cop”. The film went on to win 8 Awards & he was conferred with the Excellence Award by erstwhile Bangalore Police Commissioner Shri. Raghavendra Audrakar (IPS )

He has also organized an open street festival for Autism kids at Bangalore.

Extensively featured in media, Shajan is also a public speaker and speaks at various forums.

Arun is a sports enthusiast and follows cricket, tennis and F1. He also plays cricket in corporate and local leagues.

Since the pandemic, Arun has found a new interest in fitness (thanks to Sandeep Mall’s encouraging posts) and has made it a habit to train every day. He enjoys cycling and running, in addition to strength training.

Arun tweets at @arun_devaraju and his email id is: emailarundevaraju@gmail.com 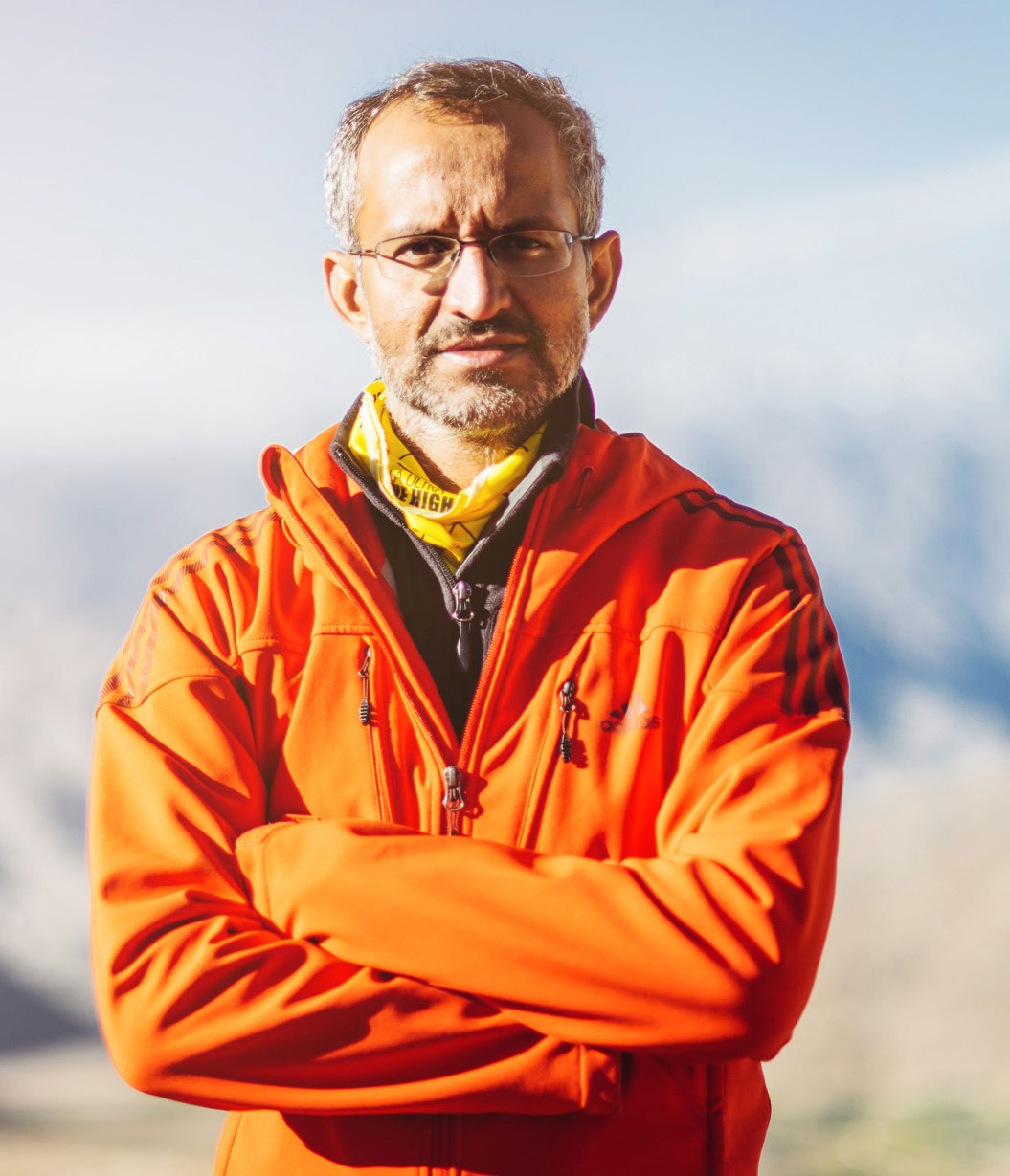 About Speaker : Student of Pain & Running (Life); Advocate of GOYA (Get Off Your Arse); Race Director: La Ultra – The High; Marathon Coaching; Author; Columnist (HT, Mint) Dr. Chauhan has been running for last 36 years and making others run too. He is an MBBS doctor specializing in Sports-Exercise Medicine (Queen’s Medical Centre, Nottingham) and Osteopathy / Musculo-Skeletal Medicine (London College of Osteopathic Medicine) with special interest in Back and Knee Pain. He was Principal Technical Consultant & Head Coach (2014-17) for Adidas India (running), Founding Director of Sports & Exercise Department at Ashoka University and Founding Head of Sports & Exercise Medicine department at Manipal Hospital, Bangalore (2006-2008). http://www.drrajatchauhan.com https://drrajatchauhan.com/blog/2021/4/9/run-bee-in-covid-era

About Moderator : Neeraj Gupta Neeraj, an MBA and a finance professional with the International Finance Corporation (World Bank Group), and a fitness enthusiast, has recently converted to a structured workout regime under professional guidance, after suffering serious injuries while doing random workouts. Twitter: @Am_NeerajGupta