“It is not that we have a short time to live but that we waste a lot of it.” : Seneca
Early one morning, before sunrise, a fisherman went to a river. On the bank, he felt something underfoot, and found it to be a small sack of stones. He picked up the sack, and putting his net aside, squatted on the bank to await the sunrise. He was waiting for dawn to break in order to start his day’s work. Lazily he picked a stone out of the bag and threw it into the water. Then he cast another stone and then another. In the absence of anything else to do, he kept tossing the stones into the water, one by one.
Slowly the sun rose and it became light. By that time he had thrown all the stones away except one; the last stone lay in his palm. His heart almost failed him when he saw, by daylight, what he held in his hand. It was a gem! In the darkness, he had thrown a whole sack of them away! What had he lost unknowingly! Full of remorse, he cursed himself. He sobbed and cried, almost out of his mind with grief.
He had accidentally stumbled upon enough wealth to enrich his life many times over, but unknowingly, and in the darkness, he had lost it. Yet in a way he was fortunate: still one gem was left; the light had dawned before he had thrown it away too. Most people are not even that fortunate.
There is darkness all around and time is fleeting. The sun has not yet risen and we have already wasted all life’s precious gems. Life is a vast treasure trove, and man does nothing with it but throw it away. By the time we realise the importance of life, much of it is whiled it away. The secret, the mystery, the bliss, the deliverance, heaven — all is lost. And one’s life is spent.
WHAT IS TIME MANAGEMENT?
Time management is your ability to use your time effectively, be productive and accomplish not only your daily tasks, but your larger life goals. It means knowing the difference between being busy and being productive: When you’re busy, your mind is preoccupied with your to-do list, skipping from one task to another without focusing on anything. When you’re productive, you have a plan for tackling everything you need to do and you’re able to get laser-focused on your goals.
To make the most of your time and achieve the life that you dream of, you must create a mental shift in how you think about time management. Stop thinking of time as a resource that’s out of your control. It’s true that there are only a limited number of hours in a day, but you can develop time management skills to focus your attention on what really matters.

“Ego is just like dust in the eyes. Without clearing the dust, we can’t see anything clearly, so clear the ego and see the world.” Anonymous
I remember a story I had read long time back in the book Creativity – unleashing the forces within by Osho.
Once there was a great sculptor, a painter, a great artist. His art was so perfect that when he would make a statue of a man, it was difficult to say who was the man and who was the statue. It was so lifelike, so alive, so similar. An astrologer told him that his death is approaching, he was going to die soon. Of course, he became very much afraid and frightened, and as every man wants to avoid death he also wanted to avoid it. He thought about it, meditated, and he found a solution. He made a statue of himself, eleven in number, and when death knocked on his door and the Angel Of Death entered, he stood hidden among his eleven statues. He stopped his breathing.
The Angel Of Death was puzzled, could not believe his own eyes. It had never happened− it was so irregular! God has never been known to create two persons alike; he always creates the unique. He has never believed in any routine, he is not like an assembly line. He is absolutely against carbons, he creates only originals. What has happened? Twelve persons in all, absolutely alike? Now whom to take away? Only one has to be taken. The Angel of Death could not decide. Puzzled, worried, nervous, he went back. He asked God, “What have you done? There are twelve persons exactly alike, and I am supposed to bring only one. How should I choose?”God laughed. He called the Angel of Death close to him, and he uttered the formula in his ear, the key to finding the real among the unreal. He gave him a secret code and told him, “Just go, and utter in that room where the artist is hiding himself among his own statues.”
The Angel Of Death went into the room, looked around and, not addressing anybody in particular, he said,” Sir, everything is perfect except one thing. You have done well, but you have missed One point, there is an error .“
The man completely forgot he was hiding. He jumped, he said, “what error?”
Death laughed. And Death said,” you are caught! This is the only error. You cannot forget yourself. Come on, follow me.”
The maximum books I have read from one author is Ryan Holiday. I recently revisited his book Ego is the Enemy as it helps me remain grounded. Some key ideas from the book:
Avoid ego, avoid it now, avoid it in the future, avoid it always.

Countdown to The Growth Retreat 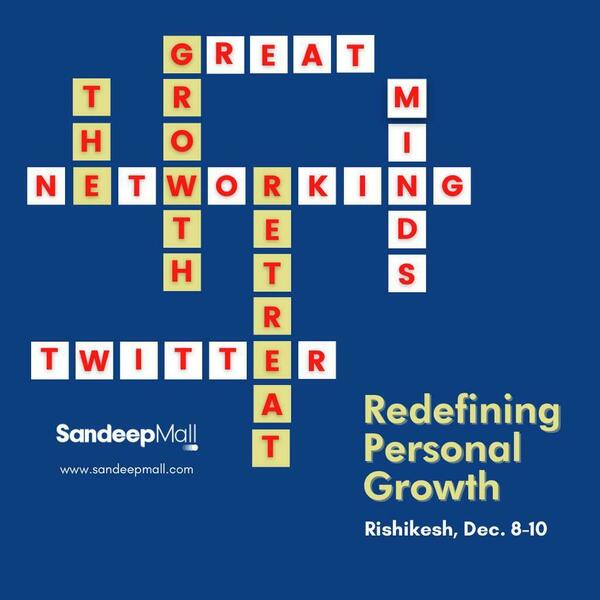 I believe in ‘Growth inside fuels growth outside’ and that’s the core purpose of the Growth Retreat that I am planning for my mentees, whom I have had the pleasure to help over the months.
A 3-day residential program on the banks of Ganga at Rishikesh this December, is meant to be a game changer in every participant’s ongoing journey of personal growth.
Focused on multi-discipline personal growth, the retreat will have unique formats of interactive sessions with domain experts in entrepreneurship, digital communication, personal brand building, work-life balance, relationship, wealth management, wellness & nutrition and more; clubbed with wholesome rejuvenation with yoga, meditation, and music – elements that will make a big difference in the way we live our life.
I am super excited about the Growth Retreat, where 20+ great minds will closely interact, share experiences and exchange ideas – a huge potential for greater possibilities and a unique networking opportunity.
Why Rishikesh, you may ask.
It is only when we step outside our comfort zone, we begin to grow, change and transform. In my personal journey of transformation, regular visits to Rishikesh have played a big role. Breaking away from luxuries, madness and nuisances of urban living, is therapeutic to begin with and sets a perfect ambiance to fuel personal growth.
What makes it even more exciting that all participating mentees and guest speakers, I met them all on Twitter!
Stay tuned for insightful articles by the Growth Retreat’s eminent guest speakers, in the upcoming issues of the newsletter.