Dear
“Nobody sets the rules but you. You can design your own life.” Carrie-Anne Moss
I remember one of my college professors narrating this story:
I was a newly appointed professor in a college. Since the college was far away from the town, all the professors used to bring their lunch with them and sit together at one table at lunchtime. The person sitting next to me opened his lunch box, looked in and said, “Again the same potatoes and the same chappatis!” I thought that perhaps he didn’t like potatoes and chappatis, but since I was new there, I didn’t say anything. The next day the same thing happened. He opened his lunch box, looked in and sighed, “Again the same potatoes and the same chappatis!”
So I said to him, “If you don’t like potatoes why don’t you tell your wife to cook something else?”
“Wife?” he said. “What wife? I prepare my lunch myself.”
So it is with your life: there is no one else there. If you laugh, you are laughing; if you cry, you are crying. No one else is responsible.
We all invest in suffering. People spend so much time talking about suffering. We see so much of this on social media. Most of the people there don’t even bother about it. In fact some of them might be happy to know you’re suffering. Why do people talk so much about suffering? What is the reason? They want sympathy. And sympathy is false love.
It is very important to understand that you are the center of your existence and no one else is responsible.
Toolkit to create the life you want

by Khushboo Mandowara
Have you ever found yourself asking questions like “Why me, God?”, “What now?” or “How will I ever get out of this?” I am sure most of you have experienced these episodes at some point in life. It could be anything – maybe you lost a job, failed in an exam, had a break-up or lost your savings.
When such things happen in life, it feels like everything is over. Whatever you worked hard for, has gone in vain. You imagined your future to be a certain way, but now everything is in crumbles. Life doesn’t make sense to you anymore. You feel stuck and hopeless.
But, these are the times when it is important for you to remember this – that whatever is happening in your life right now is simply a brush stroke in a painting. You have no idea what the bigger picture looks like. After a few years, when you will be able to stand from a distance and look at your life (the bigger picture); everything will make sense.
Here’s an Akbar-Birbal story, I funnily came across on LinkedIn:
One day, Akbar went hunting and had a little accident. He shot an arrow at his own foot and was injured. He asked Birbal what he thought about the accident, to which Birbal replied, “Everything happens for the good”. This time, Akbar was really upset and ordered for Birbal to be put in a prison. Akbar asked Birbal, “Now, what do you think?” Birbal again replied, “Everything happens for the good”. So, Birbal remained in the prison.
The emperor Akbar went on a hunting trip yet again, this time without Birbal. Akbar was captured by the tribes, who decided to offer him as a sacrifice to ‘Goddess Kali’. Just before chopping his head off, one of them saw the wound on the Akbar’s foot and decided to throw him back into the jungle, as per their customs, they cannot offer an imperfect body to Goddess Kali as ‘Bali’.
Akbar realized Birbal’s words and repented for leaving him in the prison and went back to get him. When Akbar explains what happened and apologized to Birbal for his act, Birbal says “Maharaaj, good that you left me, else they would have killed and offered me to Kali, instead of you”.
Moral of the story is, in the end everything works out. As the famous saying goes, “whatever happens, happens for good.” So, don’t judge your life based on one isolated incident. Be rest assured, years down the line, the pieces in your puzzle of life will fit perfectly well.
Your job is to simply pick the brush and paint – the bigger picture will form itself. So, here let me share 3 simple ways of how to build the bigger-picture thinking:
1. Understand that only efforts are in your control. As Krishna says, “Karma kar, fal ki chinta mat kar” – which means, do your duty without worrying about the result. So, do your best and leave the rest to God. If the result is in your favour, celebrate it. If it’s not, remember; something better is in store.
2. Speak to an experienced person or read up on an inspiring story. Their way with struggles and victories will help you look at the bigger picture. You will realise you’re not alone and that there are people who have been there and have come out as stronger, better people.
3. Spend time in nature. Nature helps to slow down your thoughts. You may be feeling unclear about something right now, but nature has the ability to show you that it gets better and there are bigger things in life. Look at the wide sky full of stars. Walk in a garden and look at the massive trees. Stroll alongside a beach and imagine the depth of it.
This may not solve your problem immediately, but will definitely provide you a different perspective.
Khushboo Mandowara is a Writer and a Life Coach. She believes words have the power to bring about a revolution in the world. With this belief, she is doing her bit by using written and spoken words to help people uncover the best version of themselves. From personal growth to career growth to building a healthy relationship – she has coached and transformed many people’s lives.
You can follow her on Twitter @CoachKhushboo

How to perform a CPR

Cardiopulmonary resuscitation or CPR is a life-saving technique in emergencies. It’s not difficult to learn, and it only takes a few minutes.
To perform CPR, follow these easy steps mentioned by RedCross:

One of the most important skills for anyone in their career is how to negotiate. From that first paycheck all the way to settling on a retirement date, you’re going to have to figure out how to bargain for what you want. My son is a great negotiator and many a times I feel bad for the other person when he is negotiating with some one. An interesting article I came across in WSJ on How to Negotiate Better and Get What You Want (Without Looking Like a Jerk)
7th July is World Chocolate Day.The day is observed as on this date in 1550, chocolate was first brought to Europe. World Chocolate Day is celebrated in different countries in different days. Watch the interesting video of history of Chocolates. Leave in comment your favourite brand of chocolate.
Came across this touching video by Gretchen Rubin The days are long but the years are short. Every moment I miss the preciousness of my boys growing up. And as a grandfather I try to recreate all those days gone by. You might be tired after a long day or tired of listening to the same music with your child nth time (my grand daughter makes me play Itsy bitsy Spider.. at every opportunity she gets), appreciate the moment. This moment will fly off. Parenting is a unique experience. Make the most of it every second.
The twitter thread I loved this week. If you lack discipline, read this thread by @mindandglory
Loved this cartoon by John Weiss. We are what we repeatedly do. The solution to positive change lies in replacing bad habits with good ones. Habits and routines are our biggest assets in changing our lives for the better. 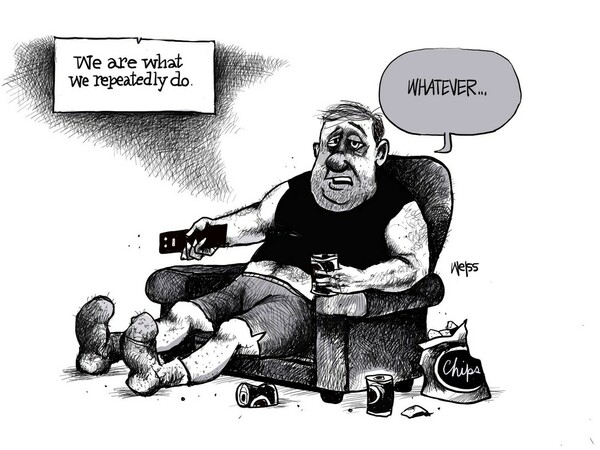 If you like this newsletter you have a zero cost way to support it by sharing with your friends and family and giving a shout out on your social media platform.On Twitter and Facebook or if you have received it as a forward please Subscribe.. Please leave your feedback and suggestions. You can mail me or tweet to @SandeepMall using #goodvibeswithSandeep.
We have also archived all the old issues and you can access them at www.sandeepmall.com They contain some very good tool kits to take charge of your health.
See you next week
Sandeep Mall